Foreword to the 2016 edition 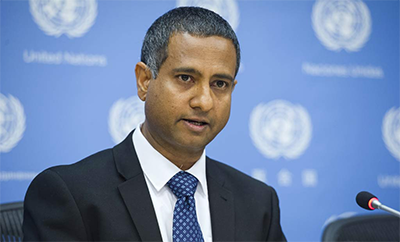 Dr Shaheed is the United Nations Special Rapporteur on Freedom of Religion or Belief, as of 1 November 2016.

The right to freedom of religion or belief is a right that is frequently misunderstood by its conflation with narrowly defined views on religious freedom.

As I write these words at the end of 2016, I am deeply distressed by the rising intolerance related to religion or belief worldwide.  Global trends clearly show a resurgence of religiously motivated action in the public square. While this phenomenon in and of itself, should not be a problem, it can become a challenge where it is accompanied by claims of religious privilege—contrary to the limits set by Article 5.1 (or indeed Article 18.3) of the International Covenant on Civil and Political Rights. On the one hand, there are the atrocious violations of religious freedom rights in situations of intra-state conflict as in the case of the monstrous crimes committed by the Daesh in Syria and Iraq; the brutal attacks on the Rohingya in Myanmar; or the heinous activities of the Boko Haram in Nigeria.  On the other hand, established democracies are also reporting rising levels of intolerance including anti-Semitism and anti-Muslim sentiment.  The outrage over the former and the shock over the latter often distract from the horror of the persistent violations of the human right to freedom of religion or belief in the numerous countries that suppress religious freedom either through blasphemy and apostasy laws or through other claims of privilege based on religion or belief.

Nearly 70 years after the proclamation of the Universal Declaration of Human Rights that protects the right to freedom of religion and freedom from religion for all, blasphemy is outlawed in at least 59 countries punishable with a prison term or in some cases death. At least 36 countries continue to enforce their anti-blasphemy laws. There are laws against apostasy in 22 countries, and at least 13 countries provide for the use of the death penalty for blasphemy or apostasy. While anyone can run afoul of these laws, and often there are allegations of the use of such laws for political purposes, these laws potentially automatically criminalize dissent and free-thinking, and victimize “non-believers”, humanists and atheists.  What is even more shocking is the cruelty with which those who are accused of violating these laws are often punished– by state agents or by non-state actors, including neighbours and relatives.

I therefore welcome the publication of the 2016 Report of the International Humanist and Ethical Union, documenting the situation of atheists, humanists and free-thinkers all over the world. From Raif Badawi, who was sentenced to 1000 lashes and 10 years in prison in Saudi Arabia for alleged “blasphemy”; to Mohamed Cheikh Ould M’kheitir, who is facing the death penalty and incitement to murder in Mauritania for alleged “apostasy”; to Basuki Tjahaja Purnama, the mayor of Jakarta who is accused of “blasphemy” amidst an election; to those secular bloggers savagely hacked to death in Bangladesh by vigilante groups; to the scores languishing in prison in Pakistan and Iran and elsewhere for expressing views deemed offensive to religious sentiment; persecution and victimization in the name of religion are both chilling and widespread.

The IHEU report is an important reminder that the right to freedom from religion or belief is as fundamental as the right to freedom of religion, and that the same human right protects freedom of non-religious thought and non-religious belief as well; and that for some humanists, atheists, free-thinkers and the unconcerned the protection of this right can mean the difference between life and death.  The report also underscores the principle that the rights and protections in the human rights framework should not, and cannot, be exercised in such a way as to destroy other fundamental  rights articulated in the Universal Declaration, such as the right to life, the right to equal treatment before the law, the right to freedom of opinion and expression, and indeed the right to freedom of religion or belief itself. The documentation of rights violations is a crucial step in mobilizing actors against continued or further violations. It is my hope that this publication will not only shed light on existing practices that must change to conform to international human rights law, but will also serve as a vigil to those who have been targeted by blasphemy and apostasy laws or otherwise been victims of religious intolerance the world over.