No formal discrimination in education

Religious courts or tribunals rule directly on some family or ‘moral’ matters; it is legally an opt-in system, but the possibility of social coercion is very clear

No religious tribunals of concern, secular groups operate freely, individuals are not persecuted by the state

Applied when the influence of religion on public life undermines others’ rights, such as SRHR, women’s rights, LGBTI+ rights.

Complete tyranny precludes all freedoms of expression and thought, religion or belief

Applied when overriding acts of oppression by the State are extreme, to the extent that the question of freedom of thought and expression is almost redundant, because all human rights and freedoms are quashed by authorities.

There is systematic religious privilege

Religious or ideological indoctrination is utterly pervasive in schools

There is state funding of at least some religious schools

State-funded schools offer religious or ideological instruction with no secular or humanist alternative, but it is optional

Expression of non-religious views is severely persecuted, or is rendered almost impossible by severe social stigma, or is highly likely to be met with hatred or violence

The non-religious are persecuted socially or there are prohibitive social taboos against atheism, humanism or secularism

There is significant social marginalisation of the non-religious or stigma associated with expressing atheism, humanism or secularism

Some concerns about political or media freedoms, not specific to the non-religious

Religious authorities have supreme authority over the state

Preferential treatment is given to a religion or religion in general

This condition is applied where there are miscellaneous indicators that organs of the state offer various forms of support for a religion, or to religion in general over non-religious worldviews, suggesting a preference for those beliefs, or that the organs of that religion are privileged.

This condition highlights countries where schools subject children to fundamentalist religious instruction with no real opportunity to question fundamentalist tenets, or where lessons routinely encourage hatred (for example religious or ethnic hatred). The wording “significant number of schools” is not given a rigid quantification (sometimes the worst-offending schools are unregistered, illegal, or otherwise uncounted); however the condition is not applied in cases where only a small number of schools meet the description and may be anomalous, as opposed to being indicative of a widespread problem.

Religious schools have powers to discriminate in admissions or employment

‘Apostasy’ is outlawed and punishable with a prison sentence

There is an established church or state religion

Anomalous discrimination by local or provincial authorities, or overseas territories

Government figures or state agencies openly marginalize, harass, or incite hatred or violence against the non-religious

Government authorities push a socially conservative, religiously or ideologically inspired agenda, without regard to the rights of those with progressive views

Discriminatory prominence is given to religious bodies, traditions or leaders

‘Blasphemy’ or criticism of religion is outlawed and punishable by death

Quasi-divine veneration of a ruling elite is enforced, or a single-party regime holds uncontested power, subject to severe punishment

It is illegal to register an explicitly Humanist, atheist, secularist or other non-religious NGO or other human rights organization, or such groups are persecuted by authorities

It is illegal to advocate secularism or church-state separation, or such advocacy is suppressed

The non-religious are barred from holding government office

There is a religious tax or tithing which is compulsory, or which is state-administered and discriminates by precluding non-religious groups

Religious control over family law or legislation on moral matters

Some concerns about children's right to specifically religious freedom

This condition may apply if specifically religious education, religious materials, or specific religious denominations are so tightly controlled that children are in fact over-protected from exposure to religion and are likely unable to explore or construct their own worldview in accordance with their evolving capacities. This condition helps us to classify states (perhaps with secular constitutions) which have criminalized specifically religious beliefs or practices. This condition is not applied if the restricted beliefs or practices are found to be outlawed due to their being of an extremist variety. While this condition does not directly reflect discrimination against non-religious persons or non-religious ideas, it does represent an overall threat to freedom of thought, conscience, religion or belief; such restrictions could spill over to affect non-religious beliefs later; and they pose a risk of backlash against over-zealous secular authorities or even against non-religious individuals by association.

State-funding of religious institutions or salaries, or discriminatory tax exemptions

It is made difficult to register or operate an explicitly Humanist, atheist, secularist or other non-religious NGO or other human rights organization

How countries are rated

Only the boundary conditions which are found to apply to a given country are shown in that country’s own “ratings table”. Here is an example ratings table which would be found on a country’s individual page. 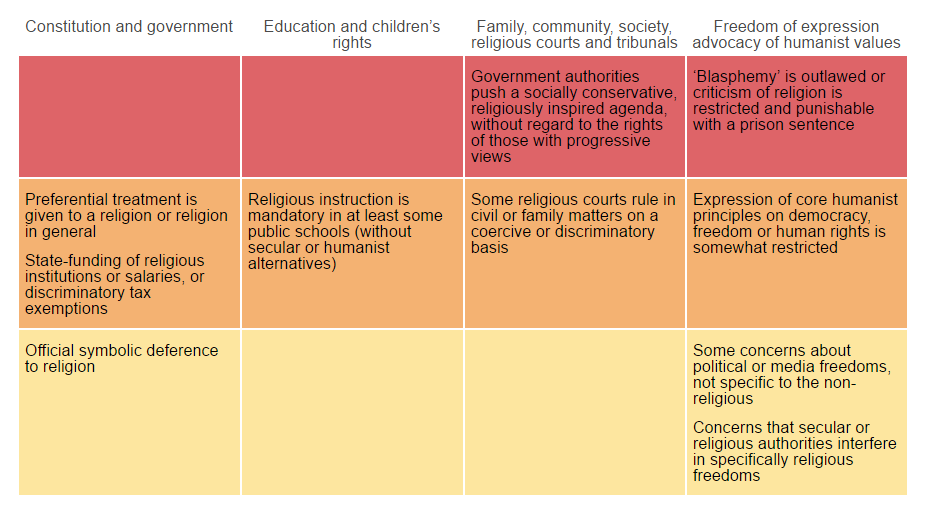 Example ratings table for one country

In the individual country ratings table, rows at the edges of the table are omitted when no boundary conditions were found to apply in those rows. In the example, there is no green row and no dark red row, because no strand was found to meet boundary conditions at the lowest level or at the highest level of severity.

Here is an example “signal light” summary which corresponds to the example ratings table above.

A “signal light” shows that the worst boundary conditions applied in this example country were at levels 3, 3, 4 and 4.

The “signal light” is designed to give an at-a-glance visual summary of the country’s rating within the scope of this report.

Another look at the full list of boundary conditions

It is common for a condition on the more free end of the spectrum (except for the “Free and equal” conditions) to be superseded by a condition on the more severe end of the spectrum. In this case, the less severe condition may remain implicit, and not listed against the country in the report. For example: if blasphemy is punishable by a maximum sentence of “death”, then the less severe boundary condition stating that blasphemy that is punishable by “imprisonment” may be omitted in an individual country’s ratings table.

The table is designed to break the boundary conditions into separate “strands” of concern, allowing for a clearer visualisation of what information is available or included in the Report. This means that as we gather more information we will be doing a better job at identifying gaps in our own coverage. As stated in earlier edition of this Report, given the way the ratings are designed, some ratings are likely to get worse over time simply because we are satisfied that additional, more severe boundary conditions have been met.

Omission of a boundary condition in the ratings box does not necessarily mean that the condition does not hold in reality; it may be that the information is missing from the Report. We are always interested in new sources of information.

The bottom, grey row does not contribute toward the “severity” rating of a country. Only the null conditions “No condition holds in this strand” or “Insufficient information or detail not included in this report” appear at this level.

It should be noted that this report cannot claim to be exhaustive. While all sovereign nations are recorded in this report, some “overseas territories” are not detailed and are not necessarily without discrimination on freedom of thought. Likewise, the individual cases listed as “Highlighted Cases” in this report are examples, not exhaustive lists.

Lack of transparency in some countries makes comprehensive analysis of those countries more difficult. In some countries, usually among the worst offenders, the secrecy of courts, or state control of media, or lack of reporting, make it impossible to produce a complete account. In some countries, vague laws or broad legal powers delegated to local authorities make it difficult to ascertain exactly how laws are applied (or not applied) on the ground.

We may still be overlooking serious concerns in some countries where we have little on-the-ground contact and the last thing we want to achieve is to make already marginalised non-religious people feel like their problems are being ignored or overlooked because we’ve given the country a better rating than it deserves, or because we have overlooked issues of concern. If you find yourself in this situation, or you have any other information including mitigation or errata for a given country, please take it as a prompt to reach out to us and make contact via freethoughtreport.com/contact.